The spectacular tournament of ‘joutes’ in Sète 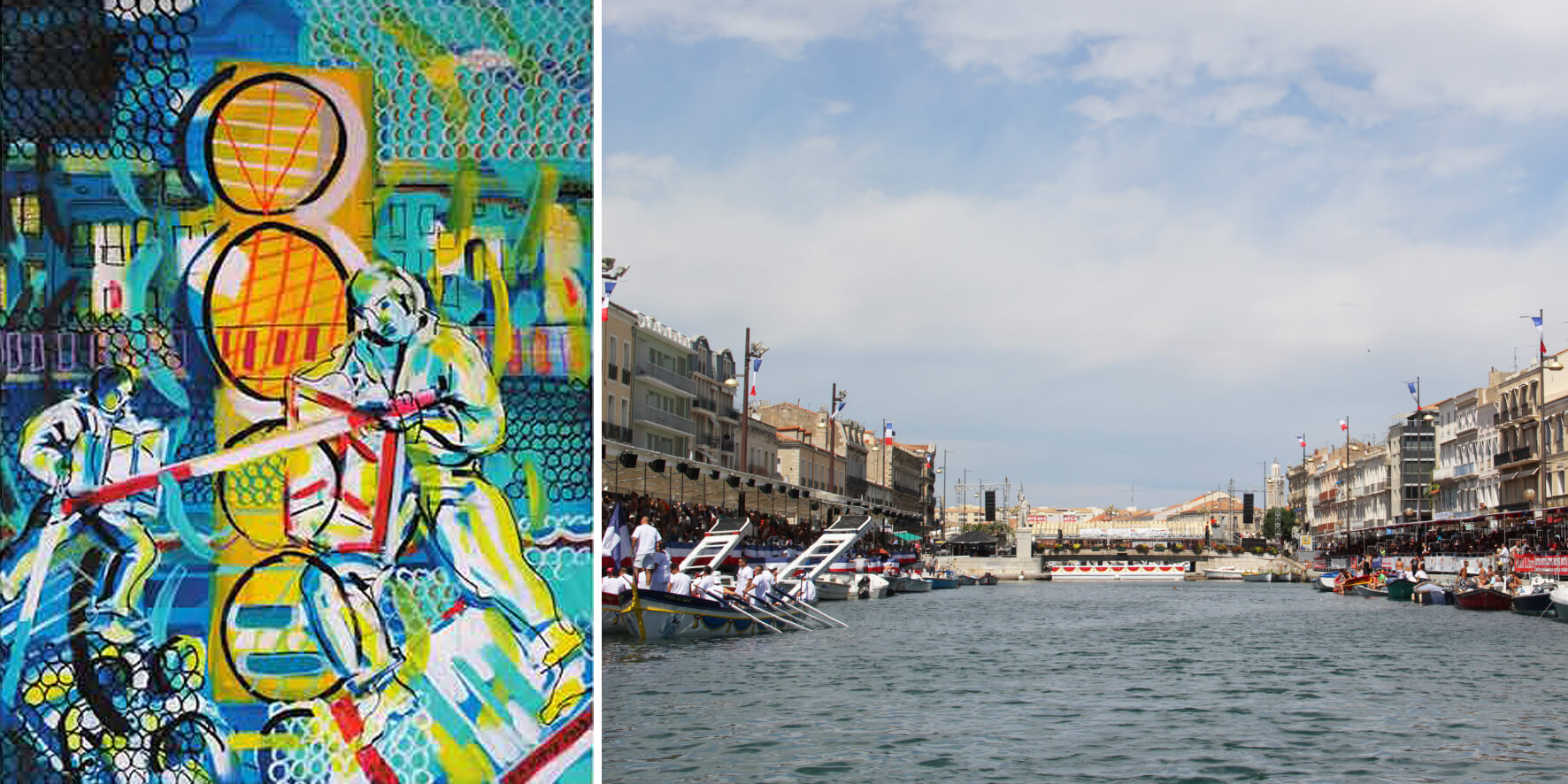 In the middle of summer, there are lots of festivals, ‘fêtes’ and celebrations. One of them is the ‘joutes’ event in the lovely seaside town of Sète. This spectacular water jousting tournament dates from 1666 and is held annually in August during the “Fête de Saint Louis“. Water jousting is more than just a tradition, folklore and sport. It really reflects the soul of the inhabitants of Sète. It’s great fun to check out for yourself, especially if you want to indulge in local traditions!

‘Joutes’ is a tradition in the Languedoc region that dates back to the 17th century. Sète organised its first water jousting tournament on the 29th of July 1966 to celebrate the foundation of the port, which played an important role during the construction of the Canal du Midi. During the tournaments in the 18th century, the married men went up against the young bachelors. Red was the colour of the married men, blue the colour of the bachelors. By looking at the colours of the boats, uniforms and spears you could see which group the men belonged to. Many of these traditions are still in use today. 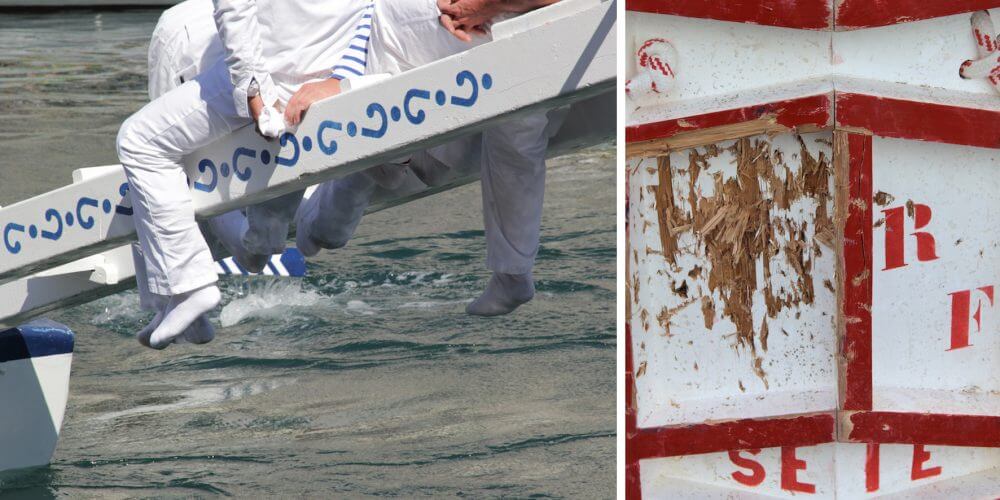 These days, the boats are led by an experienced helmsman and manned by ten rowers, mostly strong fishermen. The tournament starts with a ‘passe d’honneur’, a salutation of the jousters where they display their spears vertically and shake hands when their boats cross. Once the battle starts, you will hear a traditional jousting tune, played by an oboist and a drummer, sitting in front of their boat. On the stands, there are also bands to warm up the audience with traditional music, and to make sure that the jousters are encouraged a lot! 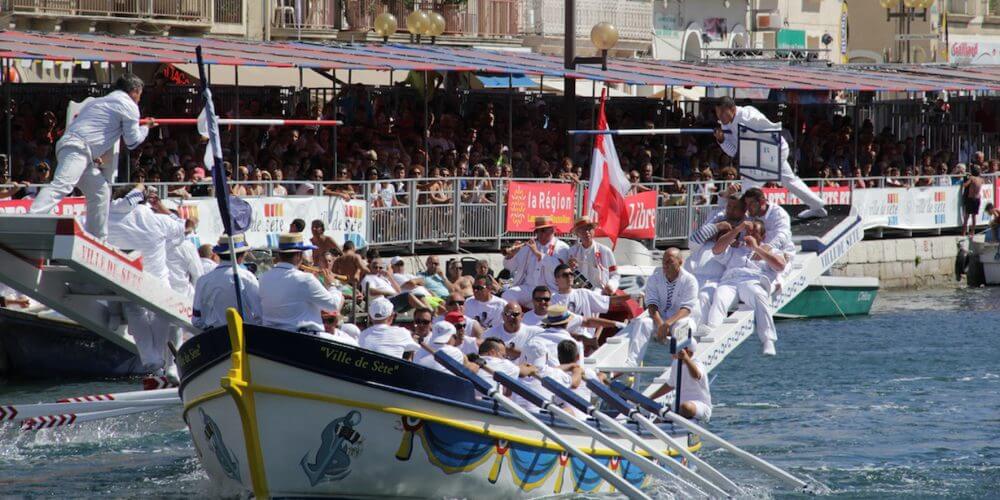 There are strict rules, which I cannot really explain here (as I don’t understand them very well myself…). In short: the goal of the battle is to push the opponent off the ‘tintaine’ (a small platform on each boat where the jouster stands, about 2 meters above the water level) with a ‘lance’ (a 2.8-meter long wooden spear). 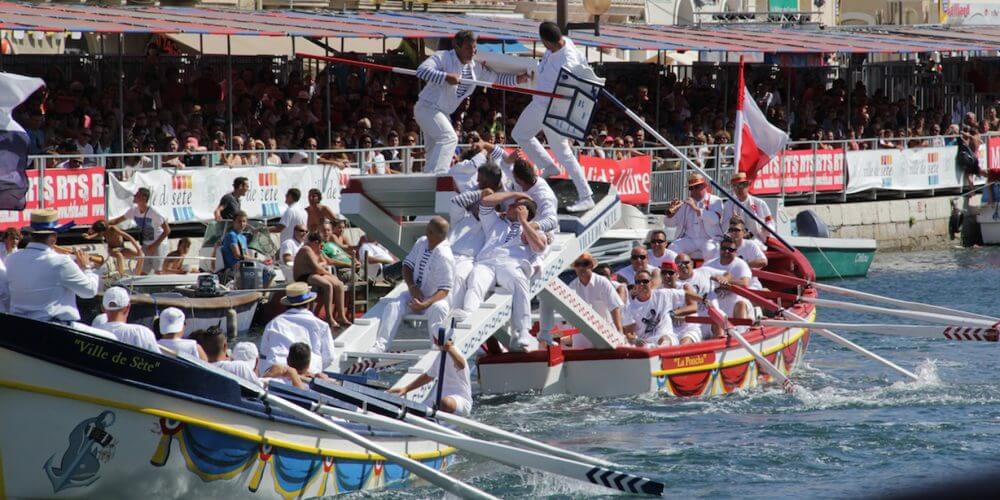 Meanwhile, the jousters have to protect themselves with their ‘pavois’, a wooden shield. The lance has an iron tip, which can hit the pavois quite hard when looking at the shield from above… The one who falls into the water is then followed by another jouster from that boat, who continues the battle. The winner can battle again until he too falls in the water. 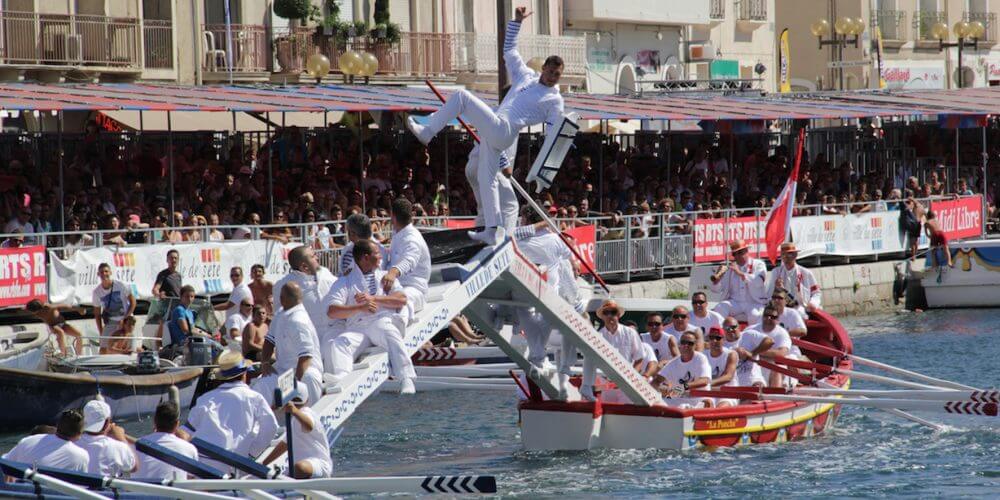 With every victory or great move, the music around the stands swells, it sure is a spectacular experience! The winner of the Saint Louis joutes tournament gets eternal fame- his name engraved on a jousting shield in the Paul Valéry museum. 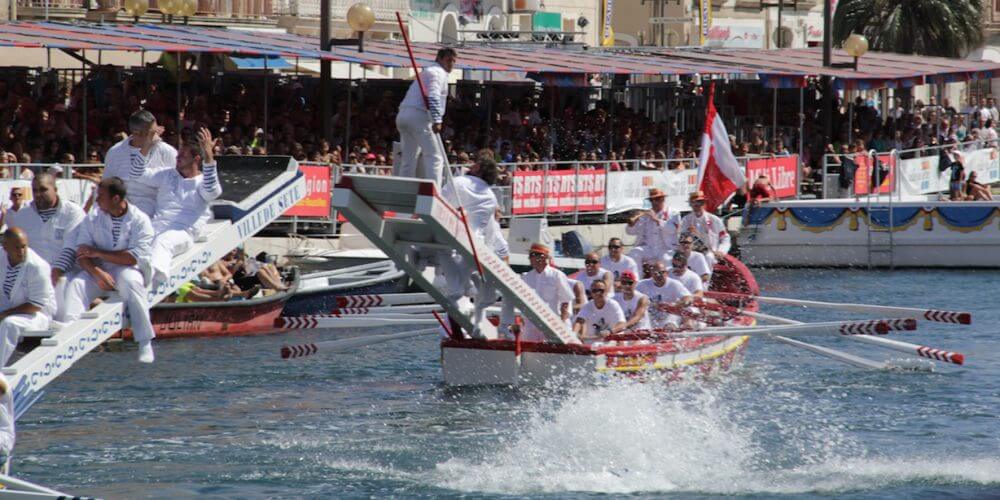 If you want to go for yourself, you can check the program at the Office de Tourisme of Sète. The festival of Saint Louis with the jousting tournaments are held annually around the 25th of August and lasts for six days. The most important battle of the heavyweights is held on the Monday of the festival, but there are more interesting battles to see.

With events like this, best is to enter Sète by Balaruc (D2), Montpellier (D612) or the A9 (Sortie 33 followed by the D600). It can be really crowded during the festival, so don’t even bother to drive to the centre. You can park either at parking areas along the Route de Marseillan and the ones at the Eaux-Blanches (when you come from Balaruc).

La Ramoneta | FESTIVAL, TO SEE | No Comments
TO SEE | FESTIVAL Christmas is coming closer and what better way to celebrate the start of the holiday season than with a light festival? Montpellier yearly organises Le Cœur... 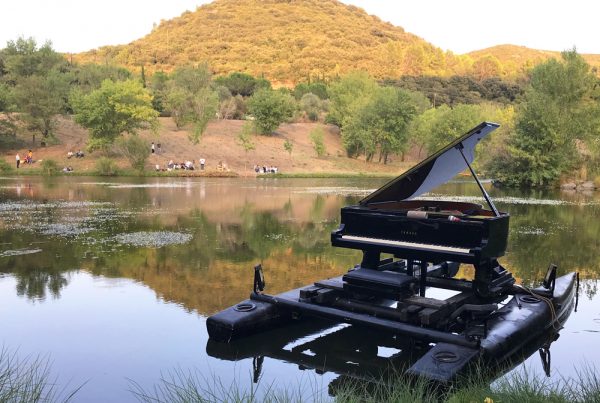 La Ramoneta | FESTIVAL, TO SEE | No Comments
TO SEE | FESTIVAL What happens if you bring a grand piano to a lake? Well, you get the utterly poetic concert tour of ‘Le PianO du Lac’. Created in... 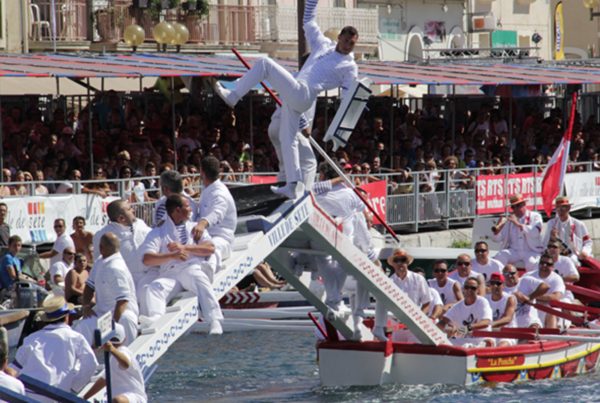 The spectacular tournament of ‘joutes’ in Sète

La Ramoneta | FESTIVAL, TO SEE | No Comments
TO SEE | FESTIVAL In the middle of summer, there are lots of festivals, 'fêtes' and celebrations. One of them is the 'joutes' event in the lovely seaside town of... 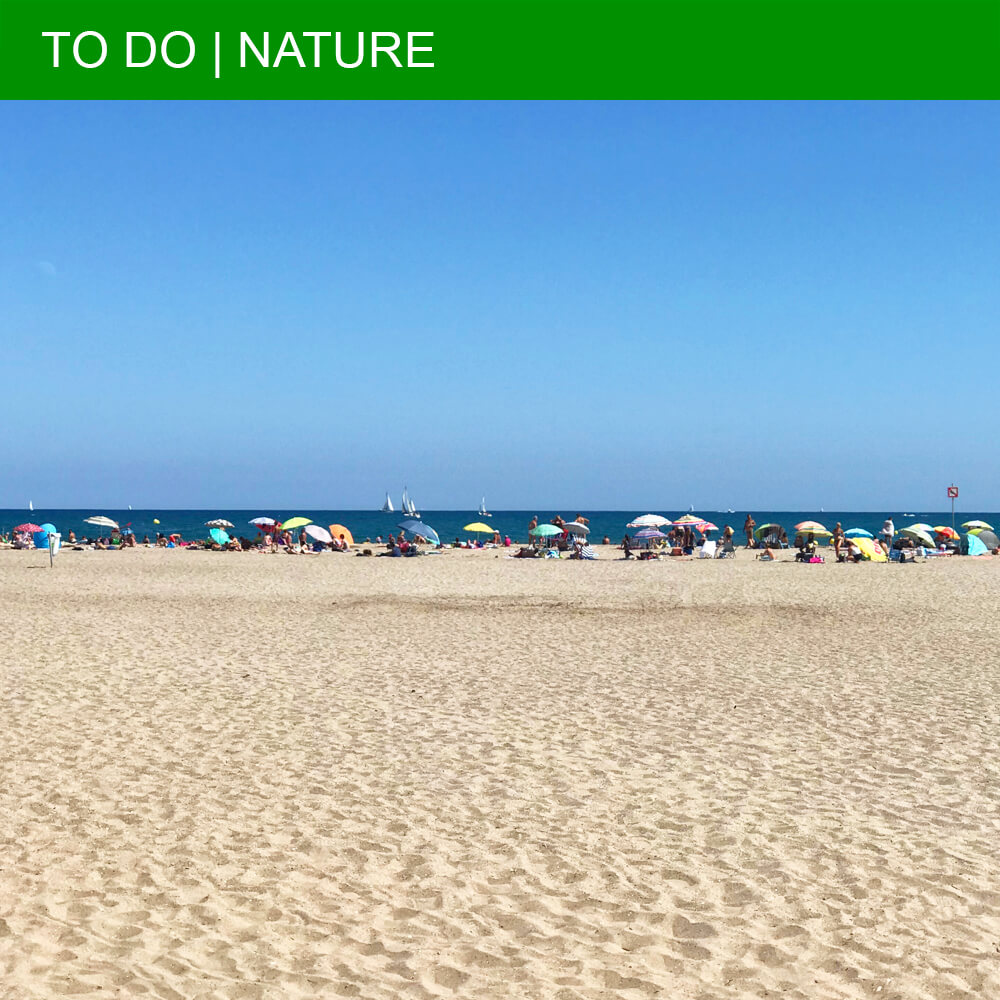