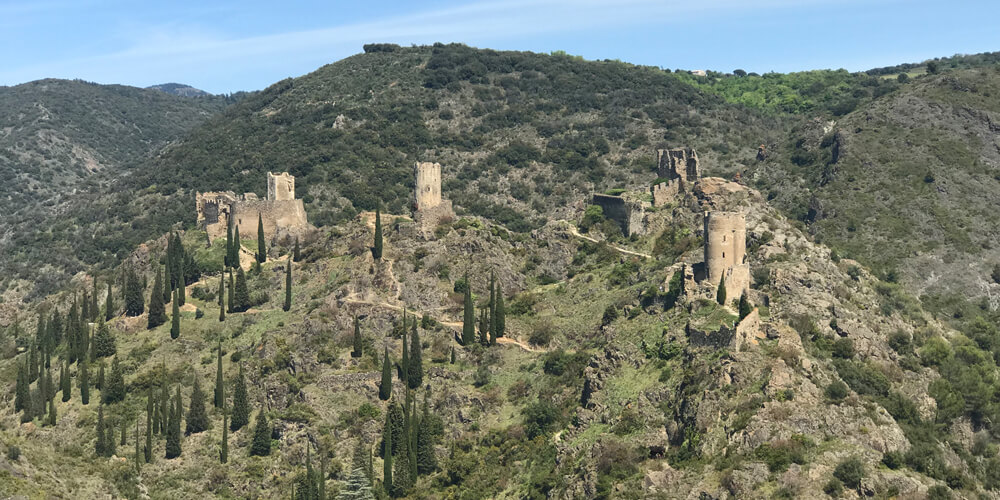 The Aude department is also known as the ‘Land of the Cathars’, named after the new religion that flourished here during the early Middle Ages. The Cathars had a turbulent history and were not appreciated by the Catholic rulers of the time. In order to defend themselves against the Albigensian Crusade in the 13th century, many castles and other fortifications were constructed to serve as strongholds. In Lastours you can still admire four of these castles, Les Quatre Châteaux. Built on a rocky spur, they have towered over the Orbiel river and Grésilhou stream since ancient times.

On a beautiful Spring day, Chéri, the kids and I drove off to Le Pays Cathare, in the direction of the Four Castles of Lastours. At least, that is what I thought when typing in ‘Lastours’ into the GPS. After less than an hour, we arrived at ‘Le Château de Lastours’, a wine estate in the Corbières, and NOT Les Quatre Châteaux in the village Lastours, located 20 minutes north of Carcassonne. I didn’t pay attention to the missing “x” at the end of château, so I should have known… Again, we drove off, now heading in the right direction. Just saying, I’m sure that none of you will make the same mistake…

Ok, so a bit later than planned, we arrived at the right Lastours and we headed for the visitors centre, situated in a former textile factory. After getting our tickets, the amiable and helpful lady at the desk told us that we could follow the trail, including a new section, to see the remains of all four castles: Quertinheux, Cabaret, la Tour Régine and Surdespine. The visit takes about two hours and starts with a 15-minute climb to the first castle, Quertinheux. The path was easy and already gave us some amazing views of some of the castles. Quertinheux stands on a separate rock close to the other three castles and most probably served as a lookout post. 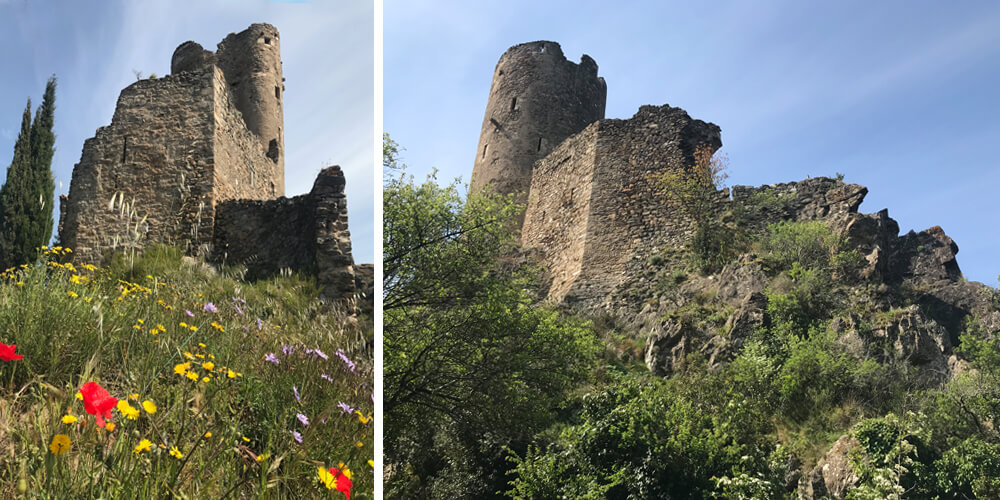 The second castle we visited was Cabaret, built on the site that once belonged to the Lords of Cabaret during the late 11th century. This main citadel used to have a barbican defence system, including surrounding ramparts. From the North side of the ridge, as we climbed up to the tower of Cabaret, we had a view over the other castles, that are all about the same distance from each other. Standing on such a historical site made me travel back to days gone by, when the Cathars used the castles to control and protect the Montagne Noire and the Cabardès region. 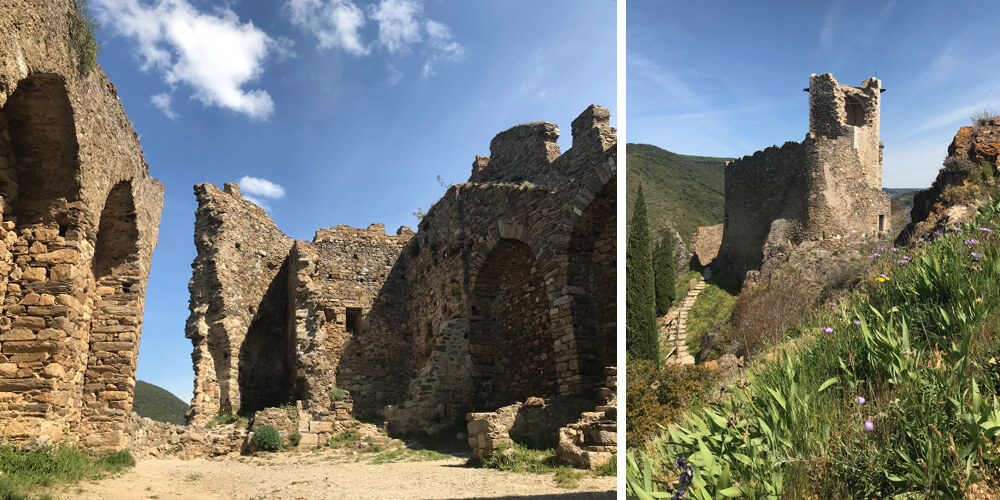 Initially, there were only three castles in Lastours. It is believed that the third one, La Tour Régine, dates from after the Albigensian Crusade. Engineers for the King of France built this tower as a replica of the towers on the Count’s Castle in the citadel of Carcassonne. Like Cabaret, we could also climb this tower. So we did, while our kids pretended they were transported back to the Middle Ages, chasing each other with wooden swords. To get to the last castle, we followed the new trail and walked behind the castles we had just visited. We brought a picnic, which we enjoyed while looking out over the green and quiet valley in front of us. The huge expanse of beautiful nature overwhelmed all of us! 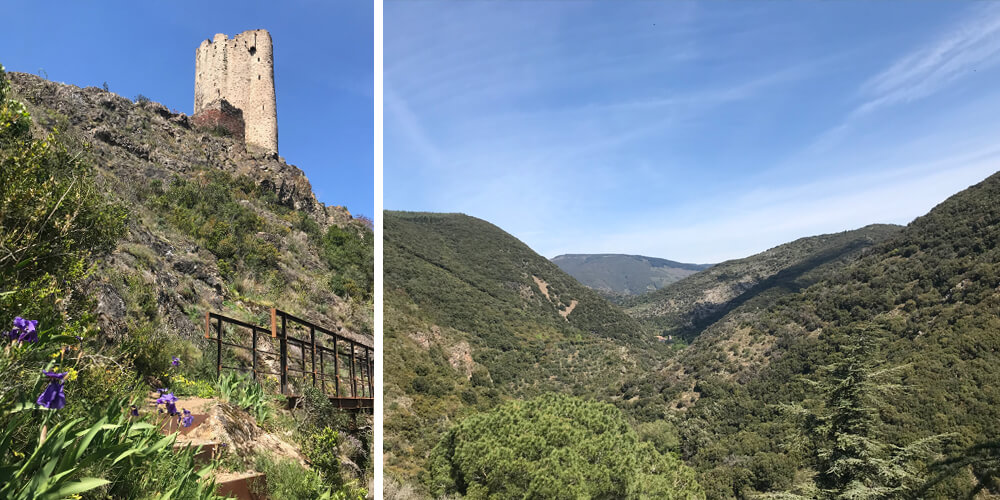 Finally, we climbed the last stairs of the day to arrive at Surdespine. Going back via the same path we had taken earlier, we returned to the starting point in the textile factory. When I checked my iPhone, I saw that we had walked for 5 kilometres and climbed 65 floors (!). I didn’t dare to say this out loud to the kids… although they were still running around happily. To get a view of all four castles at the same time, we went to the lookout, which lies 2 kilometres from Lastours. As we had already bought tickets to visit the Four Castles, the entrance to the lookout was free. Otherwise, they charge a fee of 3 euros per person (free for 6 to 15 years old). The lookout, with its fabulous view of the Four Castles, was the perfect end to our day trip. What a magical place! 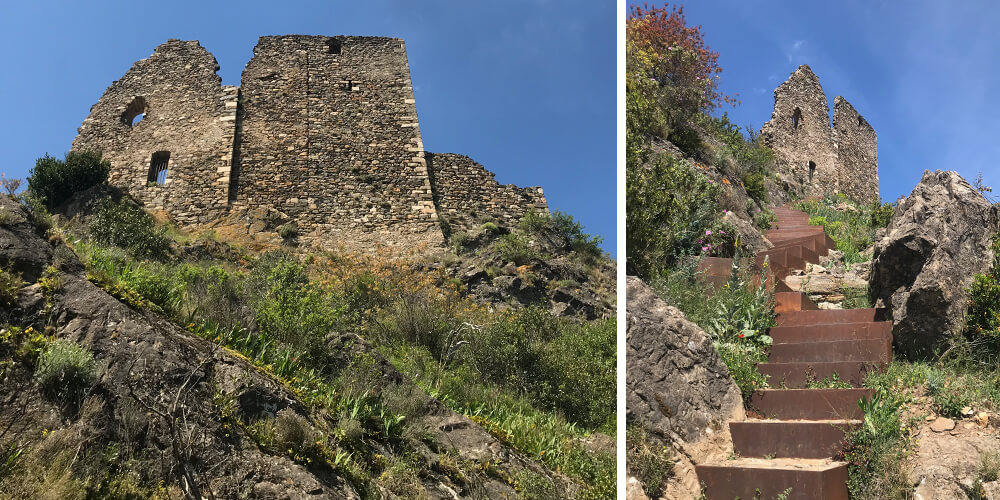 Les Quatre Châteaux, or the Four Castles of Lastours, are open for visits throughout the year, except for January. I suggest you check their website for exact opening hours and days. The site is accessible via the visitors centre after paying an entrance fee (8 euros for adults, 3,50 euros for children between 6 and 15 years old). The Belvédère is 2 kilometres from Lastours, on the D701. In Lastours you will find several restaurants. For example, there is one at the visitors centre and also a 1-star-Michelin restaurant, Le Puits du Trésor.

You will be directed to a free parking when arriving at Lastours. From here, signs lead you to the visitor centre. 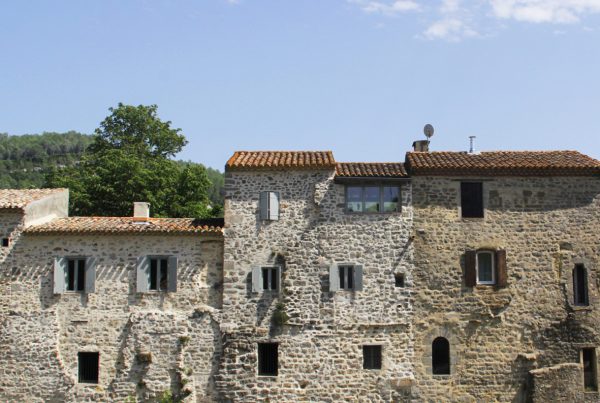 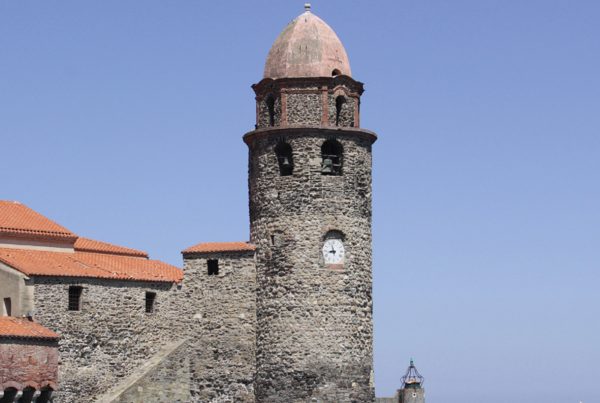